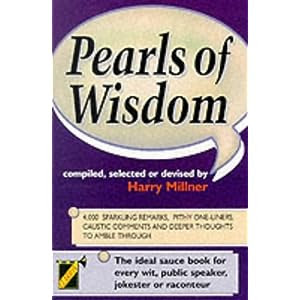 
In this book, the wit and wisdom of the ages is condensed into expressive one-liners. They are concise observations and suitable truths for anyone who wants to reflect upon life’s changes. They should be dipped into and savored perhaps, rather than ploughed through in lengthy reading. The book is sequenced alphabetically by topic so that it becomes a useful source for speech markers, or essay writers seeking inspiration. When you go through the book remember: “life would be impossible without a sense of humor!"
*This review is a part of 'A Book in My Life initiative' started by Oman Medical College students.
Posted by Noor at 8:36 PM 2 comments:

Email ThisBlogThis!Share to TwitterShare to FacebookShare to Pinterest
Labels: A Book in My Life, Non-Fiction, Oman Medical College

A Book in My Life - students initiative 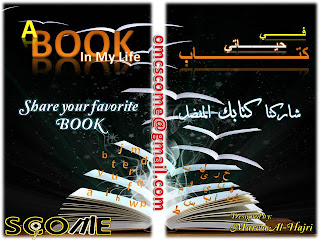 Oman Medical College students started a campaign called 'A Book in my Life' encouraging students to read and send their book reviews. Their reviews will be posted on Omani Book Mania as well as the college facebook page.
This initiative encourages reading for pleasure as an escape from the stressful world of studies. Please keep checking our blog to read their reviews.

Email ThisBlogThis!Share to TwitterShare to FacebookShare to Pinterest
Labels: A Book in My Life, Oman, Oman Medical College

Dear readers and literary addicts, welcome.
First of all, IT'S SUMMER ! I'M DONE WITH SCHOOL FOREVER !
It's been long, REALLY long since I've last read a novel. You see, I just finished class 12, and I was grounded from reading novels since last June, except for one week in February '12. I was grounded because I spent way too much time reading, that my parents dreaded this might affect my marks at school.

Now that we've got that out of the way, you might want to have a peak at my reading list for this summer.

1) Beautiful Creatures Series /Kami Garcia & Margaret Stohl
I read the first two books (Beautiful Creatures and Beautiful Darkness) back in March '11, which were mesmerizing. However, due to the long time it had been since I last read them, and the fact that they are really amazing, I decided to re-read the first two books, in addition to the new short story Dream Dark and the third novel in the series Beautiful Chaos. It's a series of magic and supernatural beings, with a thread of love linking things together, all while trying not to be cut in the process.

2) Lorien Legacies Series /Pittacus Lore
As in the previous series, I read the first novel (I'm Number Four) last year, but I'm going to re-read it this year, in addition to its new sister The Power Of Six. If you've seen the movie, then you pretty much know what this novel is about. If you didn't, it talks about alien races, and that one crazy race with the will to destroy the universe, and that other race that's protecting all others, after being near extinct by the action of the mad race.

3) Wake Triology / Lisa McMann
I’ve read many great reviews of this series, and an excerpt from the first novel Wake confirmed that. This would be my first time reading one of the works of Jodi. A friend of mine recommended her writings a LOT (YES, I’m talking about Kitten). I read an excerpt of the novel and I really liked it, so expect some positive feedback when I finish it.

5) The Truth About Forever /Sarah Dessen

In one of the previous posts on this blog, a fellow blogger highlighted this novel as being one of the best novels of 2011. I read an excerpt from this one as well, and it was pretty attractive.

6) ...
I have yet to decide here, I’ve been thinking of reading either Vampire Academy series or The Maze Runner series. What do you think ? Which would you recommend ?

What better way to escape this heat than lying back and enjoying the company of a good book?

With the temperature increasing horribly during summer, we find ourselves trying to engage in any indoor activity as long as the heat doesn't get to us.. So tell us what you have been reading or planning to read this summer.
Share your list with us!
Posted by Maryam at 3:10 PM 4 comments:

The past year was a good year for reading. I had originally challenged myself to read 30 books and I managed to read 35. Mainly thanks to owning a Kindle and being in a book club. Here's my top 11:

1. Fall of the Giants by Ken Follet: at over 1,000 pages, Fall of Giants delivers all the elements that fans of Ken Follett have come to treasure: historical accuracy, richly developed characters, and an intimate portrait of a past world. The story follows five families across the globe as their fates intertwine with the events of World War I, the political struggles within their own countries, and the rise of the feminist movement. Stories of love and loyalty, from a forbidden romance between a German spy and a British aristocrat to a Russian soldier and his brother in love with the same woman. This is book one of a trilogy. I highly encourage all book lovers to read this. Don't be afraid by its size.

2. Miss Wyoming by Douglas Coupland: I love this book for its contemporary themes and capturing the absurdities of our modern existences. Susan Colgate, a teen beauty queen and low-rent soap actress. Susan has hit rock bottom and suddenly finds herself the sole survivor of an airplane crash, takes the opportunity to start all over again. Strange bizarre events follow. This could easily be made into a movie or tv series.

3. The Bastard of Istanbul by Elif Shafakby: I loved loved loved this book and its lively characters are so full of little quirks, humor and darkness. The story of two families, one Turkish and one Armenian American, and their struggle to forge their unique identities against the backdrop of Turkey's violent history. Filled with humor and misunderstanding, this dramatic novel is about memory and forgetting, about the tension between the need to examine the past and the desire to erase it. Some parts were shocking towards the end and some characters were redeemed and some were not.

4.The Paris Wife by Paula Mclain: This book follows Ernest Hemmingway first wife Hadely as they first meet, fall in love, get married in and move to Paris in the 1920s. I loved the description of Paris at the time. The second part was a leap from the first.. I couldnt justify their passive actions.. it made me angry.. but that's a good book.. makes you react with its characters.

5. Before I go to sleep by S.J. Watson: the theme of memory and psychology really fascinates and it's a theme I continue to explore in this book. A woman wakes up everyday with no memory of the day before.. her life before.. what happens if she starts to keep a secret dairy? what will she discover? would she rather not know?

6.The Marriage Plot by Jeffery Eugenides: Madeleine is pursued (manically, coyly) by two suitors, fellow soon-to be graduates of Brown University, whose personalities and backgrounds are not so much from opposite poles as they are from different galaxies. Each suitor is a disaster walking but you end up liking one more and rooting for the under dog. As the novel progresses, each suitor learns that in order to love Madeleine, they must first learn to love (or at least tolerate) themselves. Cliché, right? Not in this book. I actually hoped it would end in a cliche happy ending.. but it didnt.. but it made more sense that way. Some choices are life altering..

7. The forgotten Garden by Kate Morton: I have a soft spot for anything Australian and was thrilled when I started to read this ti find out it is set in Australia even if it was just the first part. This is a long book.. the first half is a bit slow and takes time to build up the plot once it starts you can't put it down. This is a story of the past, secrets, family, memory and mystery.

8.Morning in Jenin by Salwa Abulhawa: this is a multi-generational story about a Palestinian family. Forcibly removed from the olive-farming village of Ein Hod by the newly formed state of Israel in 1948, the Abulhejos are displaced to live in canvas tents in the Jenin refugee camp there is always the waiting, waiting to return to a lost home. The novel's voice is that of Amal, the granddaughter of the old village patriarch, a bright, sensitive girl who makes it out of the camps, only to return years later, to marry and bear a child. The story of her brothers, one who is kidnapped to be raised Jewish, one who will end with bombs strapped to his middle. none is more important than Amal's own. Her story is one of love and loss, of childhood and marriage and parenthood. Mornings in Jenin is a deeply human novel - a novel of history, identity, friendship, love, terrorism, surrender, courage, and hope.

9. The help by Kathryn Stockett - Great story about life in the 60s in Mississippi for women and their help. This is the story of three women coming together to tell their story of being a black american maid - the racism, poverty and all their struggles and sacrifices. The characters are really charming and you grow to love them and their humor. Great book.

10. The Carrie Diaries by Candace Bushnell :is the coming-of-age story of one of the most iconic characters of our generation.
Before Sex and the City, Carrie Bradshaw was a small-town girl who knew she wanted more. She's ready for real life to start, but first she must navigate her senior year of high school. the story of how a regular girl learns to think for herself and evolves into a sharp, insightful writer. learn about her family background , how she found her writing voice, and the indelible impression her early friendships and relationships left on her. I read this on a lazy weekend afternoon - short simple and swe


11. Room by Emma Donoghue : Sad book beautifuly written but leaves you slighly shaken. Imagine your whole life is in a room.. a kidnapped has and raises her son in a small room. their whole life is trapped in their room. Will they survive on the outside? if they ever get out? desperation, curiosity, struggle and fear all in one
Posted by Maryam at 9:32 PM 2 comments:

Opinions expressed in this blog are the reviewer's and does not nessarily represent the team's. Reviews can be in both Arabic and English and can be sent to: omanibookmania@gmail.com to be posted up on the blog.